The watermills of Libourne country

-A +A
Home / History and heritage / The watermills of Libourne country
Libourne country is defined by its rivers and watercourses. Watermills are found along the banks of these, some of them are truly monumental.

L'Isle and Dronne, two rivers rising in the Massif Central, meet at Coutras, joining the Dordogne at Libourne. Their powerful flow was an inexhaustible source of hydropower for early industry, allowing many different activities to develop, of which flour mills are perhaps the most prevalent, although other types of industries also flourished here.

The proximity of Bordeaux, with all its mouths to feed ensured a strong demand for these activities.

Today the buildings are used to house certain economic activities such as the mill at Abzac, or have been restored to allow local tourist professionals to give guided tours to enthusiasts of this unique cultural and industrial heritage.

The watermills of the rivers Isle and Dronne

The Isle and the Dronne, which originate in the massif central, are rivers with a large and fairly regular flow. They meet at the town of Coutras, before joining the Dordogne at Libourne.

In 1453, the end of the Hundred Years War, the new lords of the land decided to build water mills in order to restore the value of their possessions through economic activity. The watermill at Laubardemont was founded in 1466, Abzac in 1471, Penot in 1481, and Sablon des Peintures in 1482.

These mills made flour, operated furnace bellows and acted as ports for fishermen.

From the end of the 18th century, thanks to the industrial revolution, hydraulic power found new uses, and these medieval mills were transformed for steel, oil , paper and flour production.

The valleys of Isle and Dronne went through an industrial boom, at its peak just before the First World War. The paper mill at Monfourat had 600 employees, the oil mill at Laubardemont 500, while the capping plant at Saint-Seurin, the Mill at Porchères, the packaging factories at Abzac and the rubber factory in Eglisottes were all major employers.

This development was accompanied by the rise of the railway, making the railway station at Coutras the second biggest in France.

After world war II, globalization brought terminal decline to these industries. The oil mill at Laubardemont closed in 1955, the paper mill at Monfourat in 1969, while the mills in Coutras and Penot were demolished in 1967, and the Logerie mill was abandoned in the same year. Only a few sites still retain any industrial activity, among them Abzac and Armcor-Smurfit in Saint-Seurin-sur-l'Isle. For those still working, a new conversion is in progress, through the production of hydroelectricity and tourism industry.

The Moulin d’Abzac, manufacturing mill built in the 18th centiry in the Isle, today home to family company Abzac SA.

The Moulin de Porchères The Mill at Porchères, also known as the "Minoterie du Barrage" is a majestic building built in 1850 on the river Isle, a tributary of the Dordogne. Registered as a historical monument, it is one of the last mills to have preserved intact all the milling machines used to transform the wheat into flour. 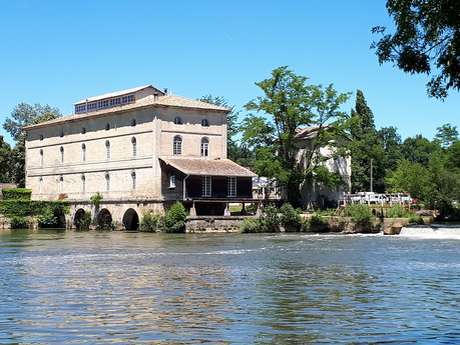